Monhegan Island is a timeless Midcoast Maine village situated about 10 miles from the mainland in the Gulf of Maine, The island is approximately 1.7 miles long and 0.7 miles wide, with no cars or paved roads. Even telephone service took until the 1980s to make it to the island, but the year-round population of less than 100 residents doesn't mind the slower-pace one bit.

During the summer months, seasonal residents more than triple the island's population, but residents and visitors alike continue to bask in the tranquil, unhurried isolation that Monhegan Island is known for.

With the arrival of European explorers like George Weymouth in 1605 and Captain John Smith in 1614, the island began to take shape as a British fishing and trading camp prior to the settlement of Plymouth Colony, eventually giving rise to a shipbuilding center that sustained British fleets.

The island is accessible by scheduled boat service from the ports at Port Clyde, New Harbor, and Boothbay Harbor. Parking is available at each port, and all boats are for passengers only - no vehicles. The Monhegan Boat Line provides service from Port Clyde at the St. George Peninsula, taking in sights like the Marshall Point Lighthouse, marine life, and lobstermen along the scenic coast of Maine.

Hardy Boat Cruises operates the Monhegan Island Ferry Service, in addition to puffin and seal tours and fall coastal cruises out of New Harbor. Balmy Days Cruises out of Boothbay Harbor offers transportation to Monhegan Island, as well as half-hour sightseeing tours from Monhegan Wharf circumnavigating the island at 2:00 PM each day. Depending on your departure point, the boat ride to the island will take anywhere from 50-90 minutes.

Two-thirds of the island is protected from development as a nature preserve, maintained by the Monhegan Associates. More than six hundred varieties of wildflowers have been identified on the island, luring hundreds of butterflies each summer. The vibrant, dense floral landscapes led to the island being designated a National Natural Landmark in 1966.

The eastern side of the island is home to some of the highest cliffs on the New England coast, offering expansive panoramic views of the Atlantic Ocean. Cathedral Woods, to the north offers extensive hiking trails among canopies of tall-standing pine, fir, and spruce forests.

There are 12 miles of trails integrated among the "wild lands” of Monhegan, including the dramatic cliffside seascapes of the Blackhead and Whitehead trailways. The Trail Map is available for purchase at the boat ticket booths from each origin port.

On the island's south end, the D.T. Sheridan shipwreck rests upon the rocky shores of Lobster Cove, an excellent site for bird watching, but not a safe site for swimming or wading due to the high surf and strong undertow. The neighboring Manana Island rests across Monhegan Harbor.

Points Of Interest On Monhegan Island

Fish Beach is a clean, quiet beach with ample supplies of sea glass for treasure hunters and fish house workshops for area lobstermen and anglers. The aptly named Swim Beach is more suited to family-friendly fun in the water.

Plan for chilly temperatures and potentially rough tides! Located at Fish Beach, the Fish House is a local fish market offering fresh seafood favorites like fish, lobster, and crab, as well as homemade stews and chowders. Ideal for a beach picnic overlooking the harbor.

This family-owned and operated small brewery offers a variety of brews crafted right on the island. The taproom is stocked with a rotating selection of five beers on tap, and several cans and bottled beers to choose from. Spacious outdoor seating with limited Maine-made snacks available as well as the occasional food truck.

Located behind the Monhegan House B&B, The Novelty offers a wide variety of hot and cold sandwiches and wraps, fresh salads, and Monhegan's only pizza, along with a carefully curated selection of wines and craft beers from highly-regarded Maine and New England breweries. 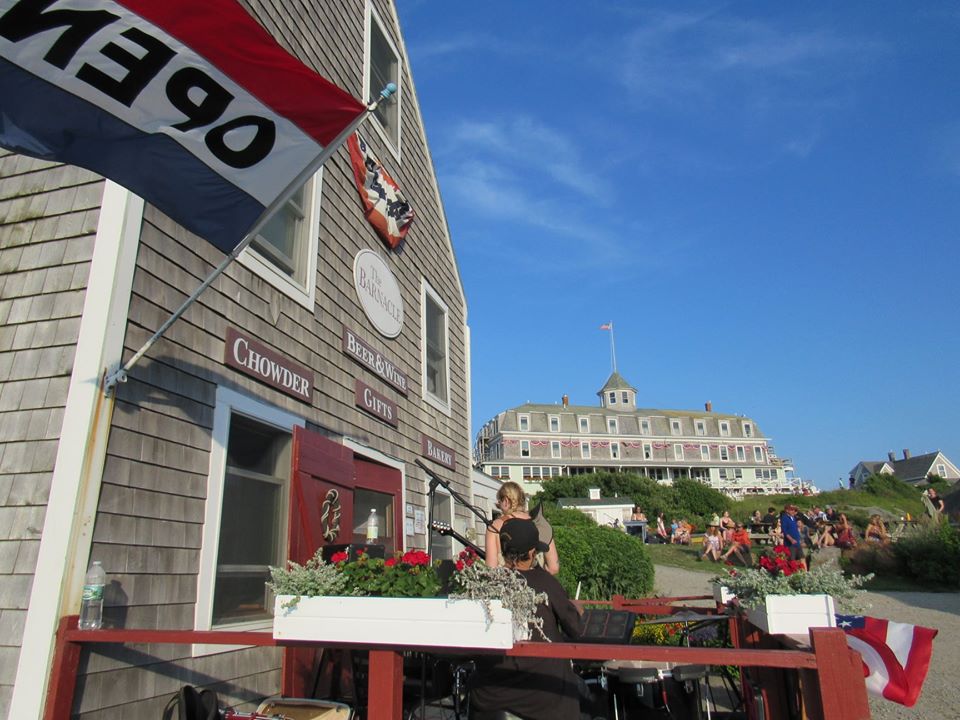 Located at The Island Inn, The Barnacle is a tea room and coffeehouse overlooking the wharf featuring assorted desserts, baked goods, and prepared sandwiches, chowder, and salads for takeaway or waterfront dining. The on-site gift shop offers unique Monhegan-themed treasures.

The Manana Island Station has served as an essential navigational aid in the area's commercial fishing industry since the mid-19th century. It is one of the few fog signal stations still operating in the United States separate from a light station. Formerly a part of the Monhegan Light Station, the Manana Island Station began to function independently in 1876. The station switched from being manned by a traditional keeper to operation by Coast Guard staff until going automated in 1986.

A post shared by Benjamin Williamson (@benjaminwilliamsonphotography) on Jun 7, 2018 at 11:01am PDT

Built in 1824 and later rebuilt in 1850, Monhegan Island Light is the second highest lighthouse in the State of Maine. The modernized, solar-powered lighthouse stands 178 feet above sea level.

The Monhegan Island Historical and Cultural Museum now operates the Monhegan Museum of Art and History at the keeper’s house adjacent to the lighthouse, where seasonal exhibits put Monhegan artists on display from July through September. Popular exhibits include works by Edward Hopper, Rockwell Kent, George Bellows, Robert Henri, and Jamie Wyeth. For more Monhegan art, local galleries and studios like the Lupine Gallery open daily to display and sell original works.