Cape Elizabeth, Maine is home to Fort Williams Park and Portland Head Light. After a long and storied history as a military installation, which began construction in 1787 and served through both World War I and World II, Fort Williams was finally decommissioned in 1962. Fort Williams and the surrounding acreage was purchased by the Town of Cape Elizabeth just two years later, in 1964. The former army post is now home to a 90-acre park featuring picnic facilities, hiking trails, recreation areas, historic sites, and majestic coastal views, as well as events such as the Beach to Beacon 10K, where breathtaking views of Casco Bay and Portland Head light await at the finish.

History of the park 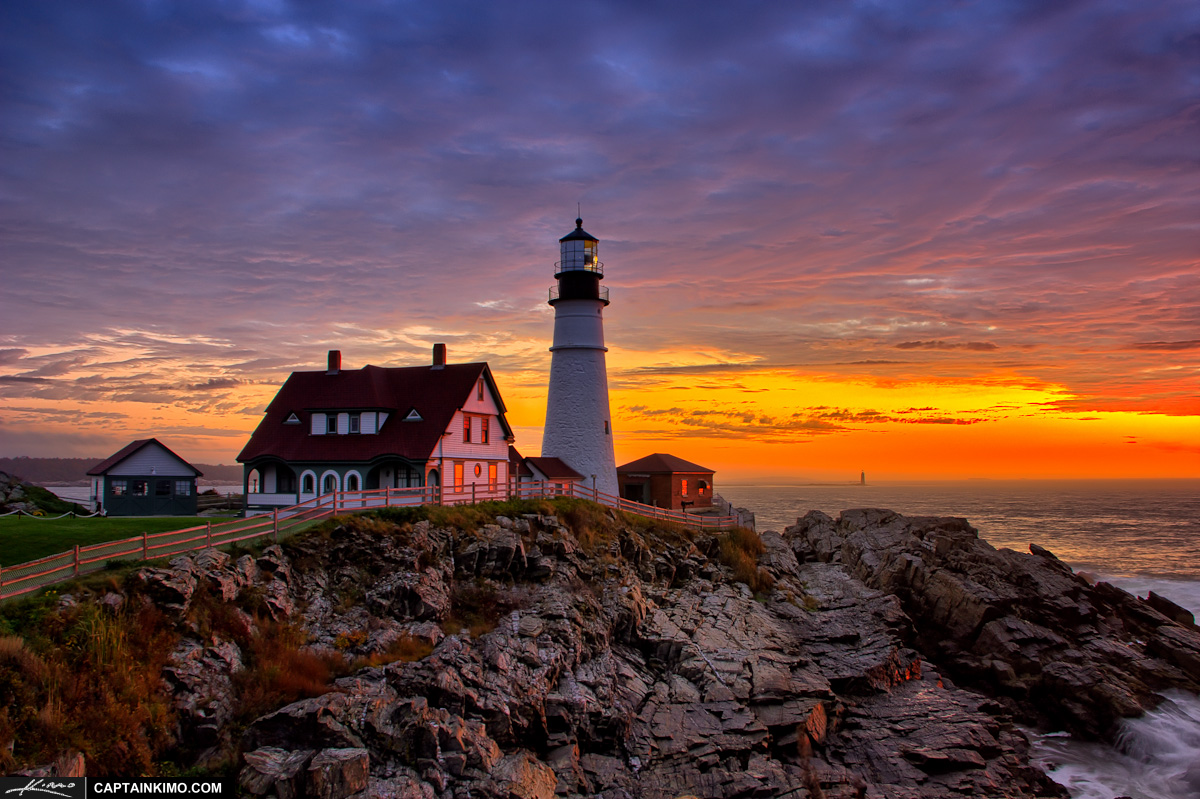 Fort Williams and Portland Head light have a revered history of providing strategic protection to the Portland area. During the battles of the American Revolution and World War II, preservation of Portland Harbor was critical. A system of forts that once served to fortify the region still dot the series of islands along the harbor's coastline, including Fort Gorges, Fort Preble, and Fort Scammel.

Fort Williams itself went into service in 1898, remaining in use until 1962, but the remarkable history of the area extends back to the first posted guard of eight soldiers at Portland Head in 1776 to warn citizens of approaching British attacks.

Eleven years later, construction of Portland Head Light began, at the order and funding of the General Court of Massachusetts. In 1872, an original 14-acre land purchase established Portland Head fortification sub-posts, later expanding into 90 acres and the development of the first three batteries by 1898.

The turn of the century brought building expansion to Fort Williams, resulting in officers' quarters, a hospital, gymnasium, bakery, fire station, and infrastructure development to comfortably accommodate the troops that called the area home. During World War II, Fort Williams served as the headquarters of the Harbor Defenses of Portland before being re-designated as a logistical and administrative support installation for all military units and personnel in the state in 1950. In January of 1962, the fort was officially closed until being purchased by the Town of Cape Elizabeth in December of 1964 for $200,000. 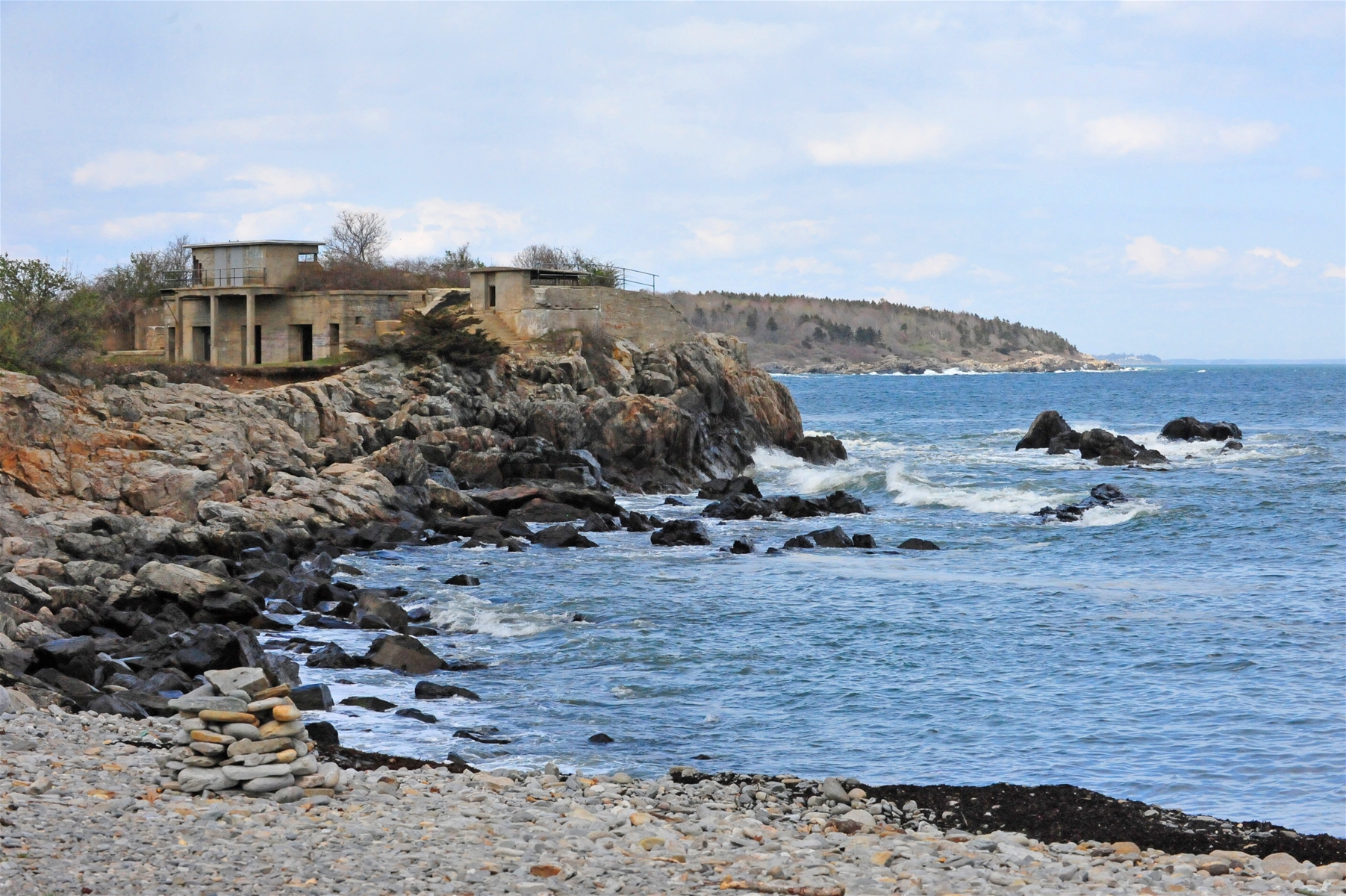 Fort Williams originally boasted three artillery batteries - Sullivan, DeHart, and Hobart - built between 1896 and 1898, followed by Battery Blair in 1903 and both Battery Garesché and Battery Keyes in 1906. Topped by a mine observation station, Battery Keyes was the only pre-war battery at the fort to remain active throughout World War II, as the 24-hour “alert” battery for the fort's joint Army-Navy Harbor Entrance Control Post to regulate sea traffic into the harbor.

Among the largest class of American gun batteries, Battery Blair was a reinforced concrete, 12-inch coastal gun battery mounted with two Breech-loading Rifles on disappearing carriage mounts. With an eight-mile firing capability, Battery Blair was designed for use against the sides of battleships and cruisers. The development of battle-fleet mounted, longer-range weapons and aerial bombing contributed to the battery being deemed obsolete following the attack on Pearl Harbor. The half-excavated, decommissioned battery is now the Battery Blair Memorial. 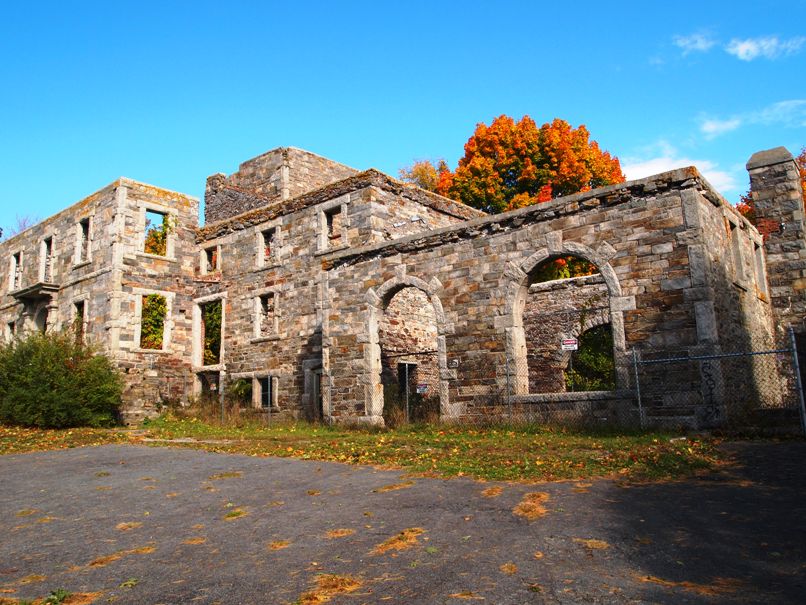 Completed in 1858, Goddard Mansion pre-dates the fort itself. Built for noted businessman John Goddard, the mansion was one of the first truly grand homes along the shores of Cape Elizabeth. Acquired by the army in 1900, the mansion was used as housing quarters and a club for non-commissioned officers. The still-standing walls of the mansion are now fenced off, overlooking Fort Williams Park and the Casco Bay. 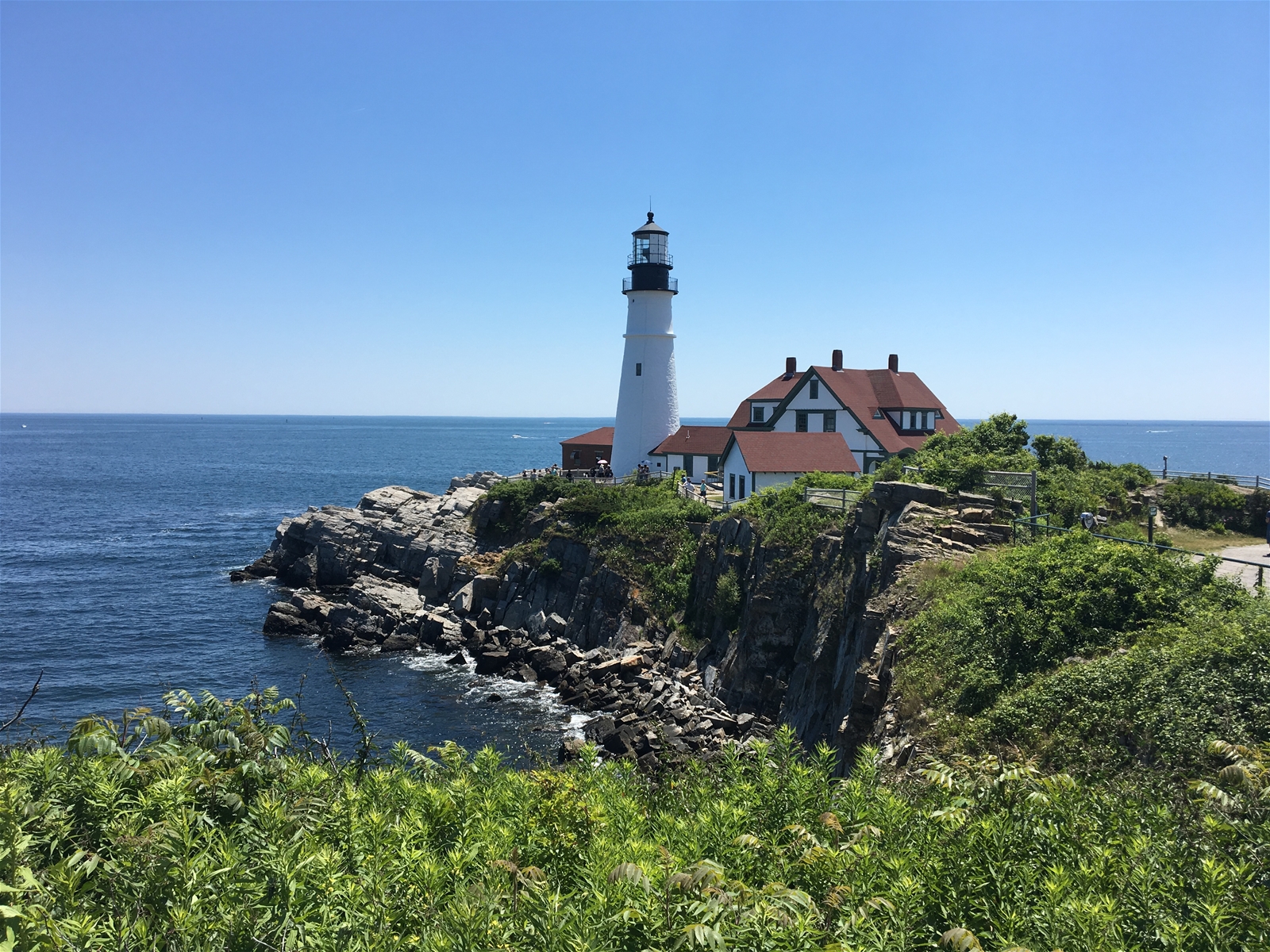 Completed in 1791, and acquired from the U.S. Coast Guard by the Town of Cape Elizabeth in 1993, Portland Head Light is located adjacent to Fort Williams Park. It is the oldest lighthouse in Maine, and the most photographed lighthouse in America. The cliff-side loop trail straddles the beautifully chaotic layers of quartzite and phyllite rock formations overlooking Portland Harbor, Casco Bay, and four additional lighthouses: Spring Point Ledge Light, Ram Island Ledge light, Halfway Rock Light, and Cape Elizabeth Light.

The original plans called for the Portland Head Light tower to be 58 feet tall, soon redesigned at 72 feet high to accommodate blockage from the south. Renovations temporarily reduced the tower's height by 20 feet in 1813. Today, the tower stands 80 feet tall. The light station is currently automated, with the tower, beacon, and foghorn maintained by the U.S. Coast Guard. The lighthouse tower is not open to the public, but there is a museum in the keeper's house.

Construction of the original Keeper's Quarters began in 1790, upgraded to a larger dwelling in 1816 with two rooms, a cellar, and a porch. The current Keepers' Quarters opened in 1891 in the form of a two story duplex, serving as home to the head and assistant lighthouse keepers and their families until 1989. Three years later, it was opened to the public as a gift shop and museum.

Here, you'll find artifacts, documents, navigational aids, Fresnel lenses, models and photographs that detail the history and timeline of the lighthouse and Fort Williams. The Museum at Portland Head Light is open daily from June - October, from 10:00 AM - 4:00 PM. From mid-April into May, and then again from November into mid-December, the museum is open only on the weekend. A variety of local tour and charter companies provide guided tours of Portland Head and other area lighthouse sites. 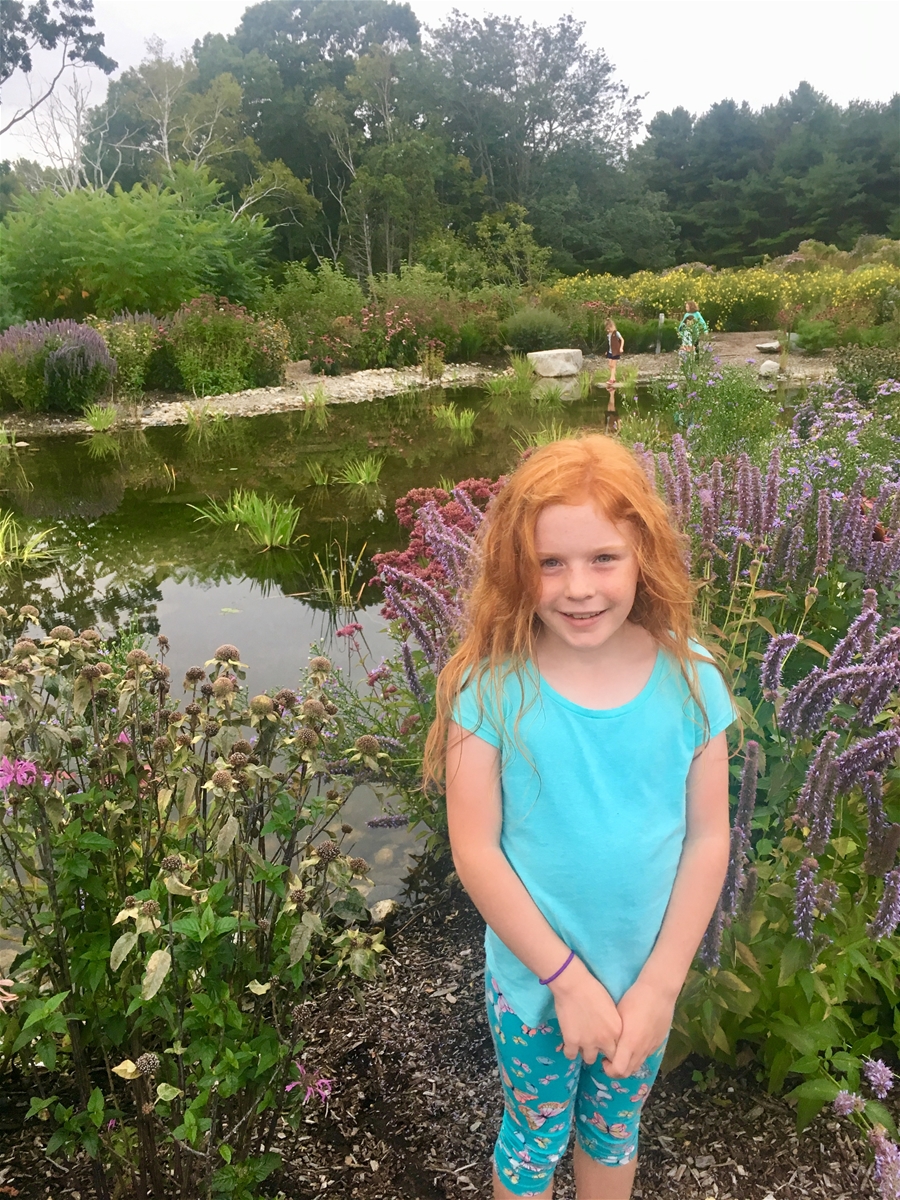 The Ecology Project at Fort Williams Park is a long-term, ongoing preservation project by the Friends of Fort Williams. The non-profit organization, established in 2001, aims to "preserve and enhance the natural resources and visitor experience of Fort Williams Park by providing planning and stewardship for projects that support the Park’s ecology, accessibility, and open space".

Following completion of their Cliffside project to address invasive plant species, and the development of the Lighthouse View native meadow, the organization set to create the Children’s Garden, a natural site encouraging the exploration and appreciation of local history and ecology through stimulating, interactive play.

Natural features in the 1.5-acre Children's Garden include meandering pathways and shallow ponds teeming with native plant and wildlife species. Whimsical elements like a “gopher tunnel” and tree lookout fort spark imaginative curiosities and a connection to nature.

How to get to the park

Fort Williams Park is located at 1000 Shore Road. From the north, take Route 77 southbound to South Portland. Take a left on Broadway, then a right on Cottage Road (becomes Shore Road) for 2 miles to the park entrance.

From the south, take Route 1 northbound to Oak Hill in Scarborough. Take a right onto Route 207, then a left on Route 77 northbound to Cape Elizabeth. Turn right on to Shore Road for 2.4 miles to the park entrance.

On the north side of the entrance road, you'll find a small rocky beach area known as Ship Cove. The cove is bordered by Battery Keyes on the left and the remains of Battery Hobart on the right, where a wharf mine and tramway once served the military station. The site offers a swing set, picnic tables and benches, two dive paths, public-use charcoal grills, and spectacular views of Ram Island Ledge Light located in Casco Bay.

The area is also home to a diverse array of sea life flocking to the coves rocky shores, including sea stars, hermit crabs, rock crabs, and sculpin. Some of the best scenic opportunities in the area can be found from the Cliff Walk, whose trail straddles the rocky shoreline for a unique, family-friendly adventure. Ample parking for the beach area is available to the left of the park entry, before reaching the lighthouse.

Know before you go

Fort Williams Park has a carry in/carry out policy, meaning that there are no trash receptacles in the park. There are also no permanent restrooms within the park. Portable restrooms are located between the Central Parking Lot and the Portland Head Light.

Additionally, the park is a non-smoking facility. Cape Elizabeth residents and guests are asked to demonstrate good stewardship, taking measures to do their part in preserving the ecology of Fort Williams Park. Guests are encouraged to plan on at least an hour to explore the lighthouse, museum, and gift shop, but if you take advantage of the park's numerous walking trails, beach area, and scenic opportunities, you can surely make a day of it! The Park is open year-round from sunrise to sunset, and admission is free.