Exploring The Islands Of Casco Bay

As Maine’s largest metropolitan area, the Greater Portland and Casco Bay region is a blend of rustic charm, maritime adventure, and modern innovation. The storied stretch along the southern coast of Maine spans from Sebago Lake to Casco Bay, and from Scarborough to Freeport, keeping some of New England’s most treasured destinations easily within reach.

Casco Bay is an inlet off the Gulf of Maine occupying roughly 200 square miles of island-speckled waters. Once the mouth of the Androscoggin River, Casco Bay now joins the Kennebec River at Merrymeeting Bay.

In 1700, a Dutch military engineer by the name of Colonel Wolfgang William Römer estimated that Casco Bay held "as many islands as there are days in the year", leading to the bay islands being dubbed the “Calendar Islands”. More than two centuries later, former Maine state historian, Robert M. York clarified that there are "little more than two hundred islands" in Casco Bay.

Casco Bay is home to a series of abandoned military fortifications that served the area from the War of 1812 through World War II. Peaks Island was the centerpiece of the bay’s military activity, and today, there are remnants of more than 50 military installations on Peaks Island alone, including gun emplacements, watchtowers, bunkers, barracks, and bases - collectively known as Battery Steele.

The sites of some significant forts can be explored in the islands of Casco Bay as well, like Fort Gorges and Fort Williams, while others have since been redeveloped. Casco Bay is also the location of seven prominent New England lighthouses. 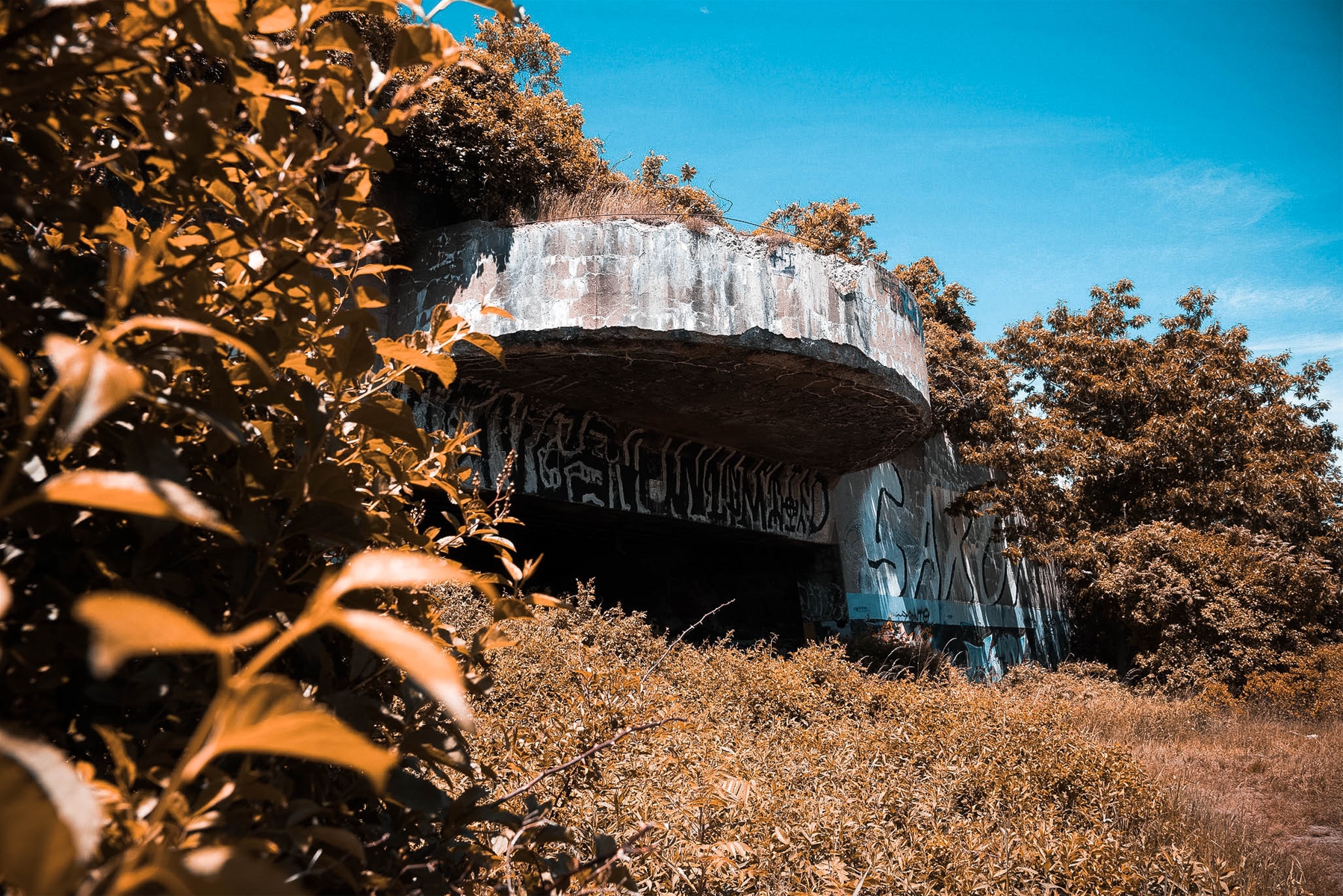 Completed in 1942 as part of WWII, Battery Steele was intended to offer protection to Casco Bay and Portland Harbor. In 2005, the Battery was listed on the National Register of Historic Places. Today, visitors can tour the military site on marked trails detailed on the Peaks Island Preserve map. 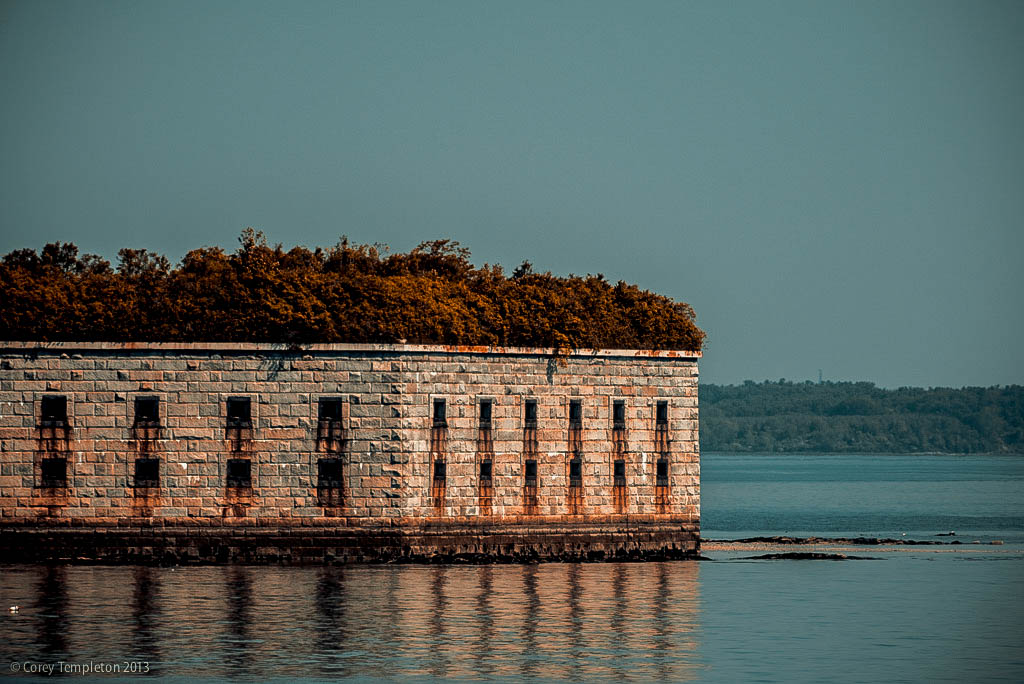 Following the War of 1812, Fort Gorges was proposed for Hog Island Ledge at the entrance of Portland Harbor. Constructed from 1858 to 1864, the fort became obsolete before it was ever put into use. Fort Gorges was added to the National Register of Historic Places in 1973. Today, the fort serves as a park, accessible only by boat. 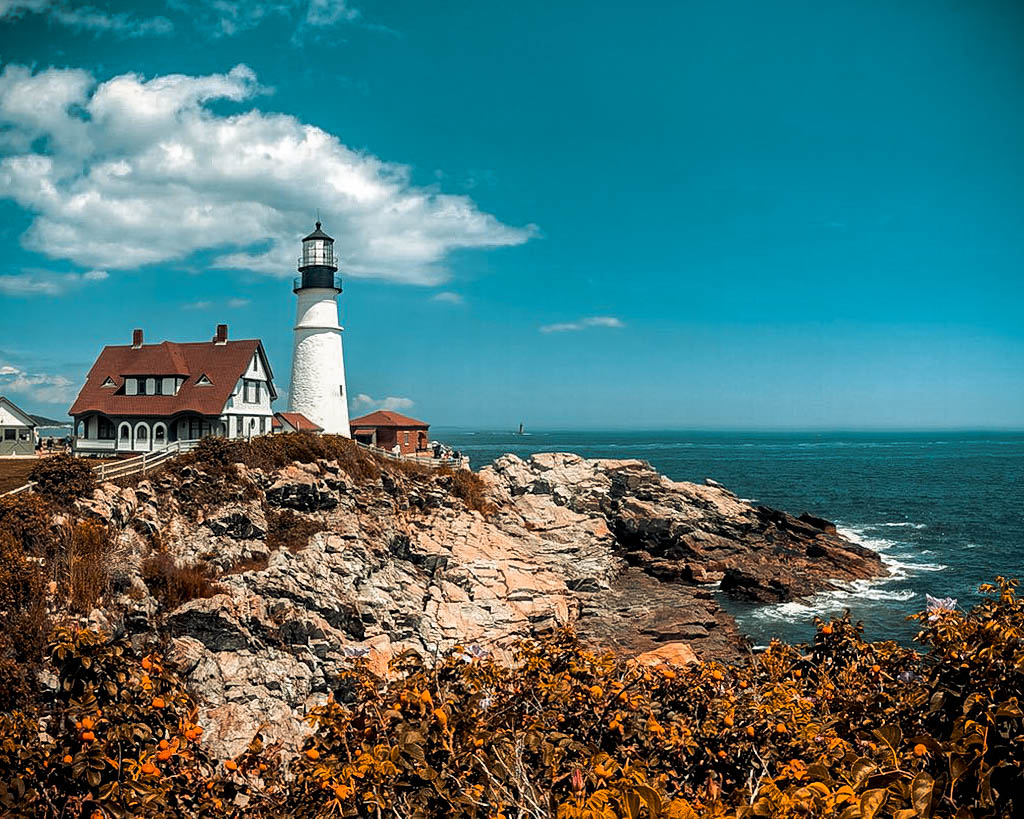 Fort Williams is a former United States Army fortification in use from 1872 to 1964 as part of the Coast Defenses of Portland. In 1979, the Cape Elizabeth Town Council designated Fort Williams as a public park greeting all visitors to Portland Head Light.

Cushing Island’s Fort Levett and Fort McKinley on Great Diamond Island were decommissioned and have since been privately redeveloped. Fort McKinley’s sub-post, Fort Lyon on Cow Island’s “Rippleffect Side” now serves as an eco-camp for environmental, adventure, and leadership development programs.

Some of the original brick buildings at South Portland’s Fort Preble still remain as part of the Southern Maine Community College campus near the Spring Point Ledge Light. Fort Scammel on House Island has changed hands in private ownership many times, with an array of proposals for its use, but preservation always seems to remain in focus. 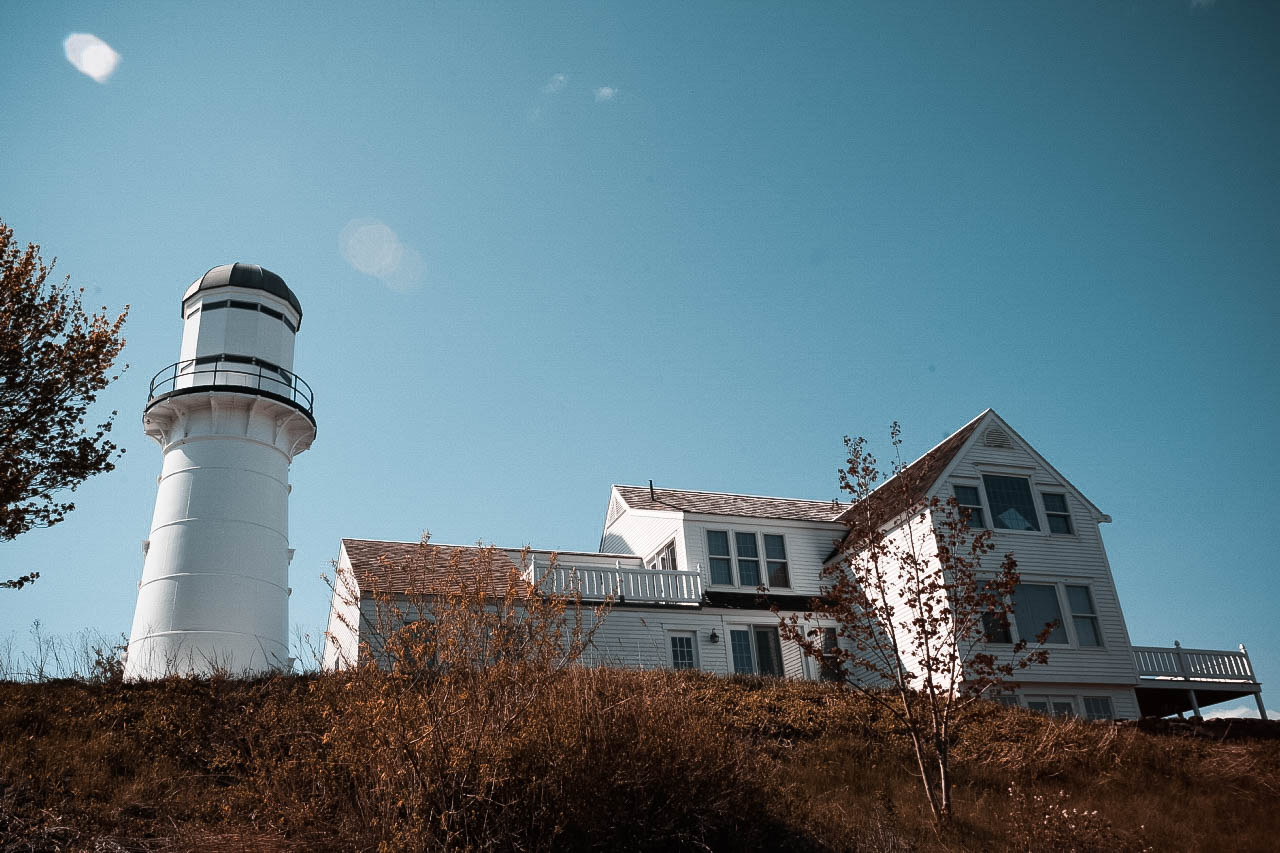 Cape Elizabeth Lights (or Two Lights) is adjacent to Two Lights State Park at Cape Elizabeth. Originally built in 1828, the twin towers were the first in the nation to employ steam-driven warning whistles. Use of the western light was discontinued in 1924, but the eastern tower remains in service. Both still stand, at 67′ in height. 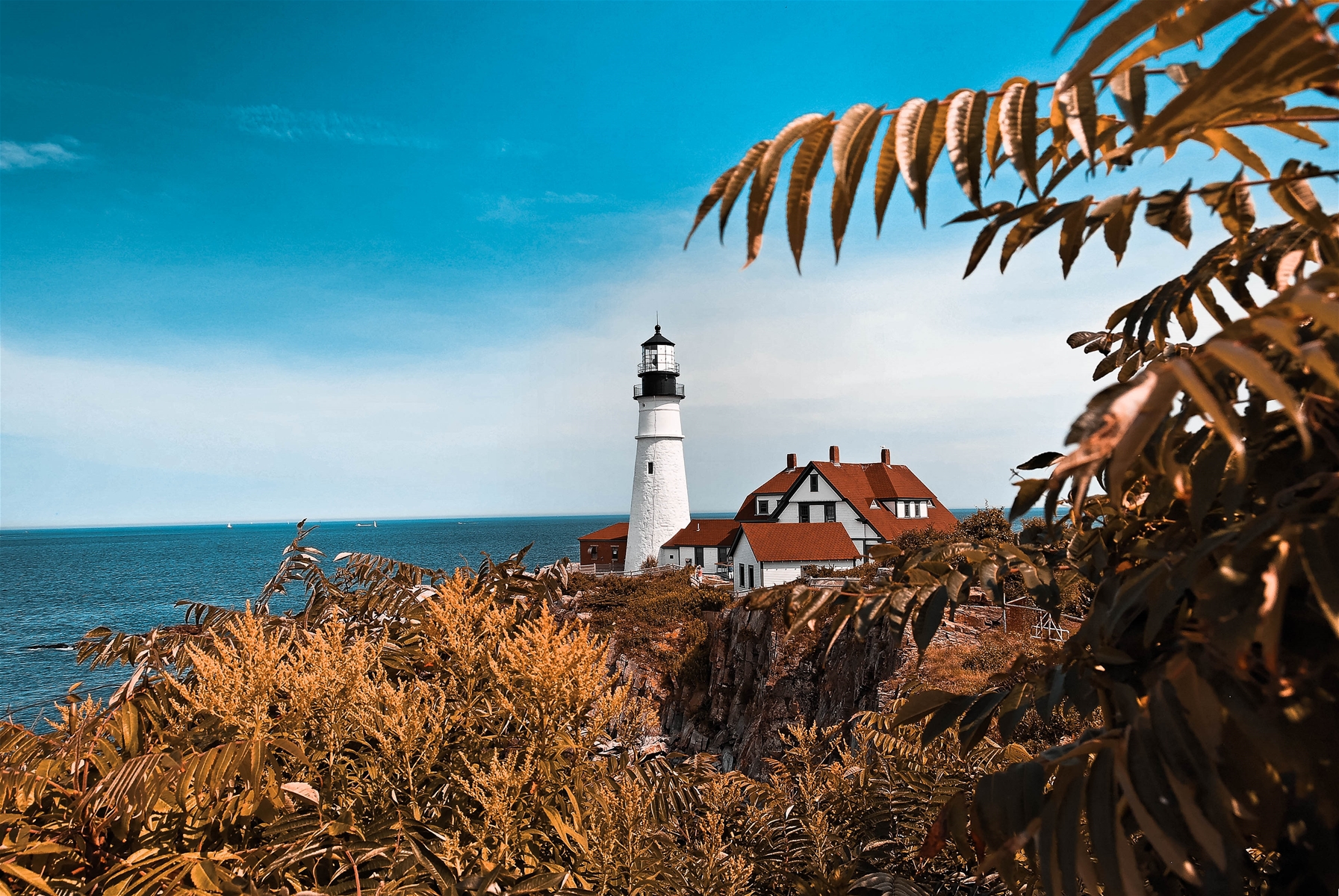 Portland Head Light is situated at the entrance of the primary shipping channel into Maine’s Portland Harbor. The oldest lighthouse in the state, the 80’ Portland Head Light now operates as an automated light station maintained by the United States Coast Guard beside Fort Williams Park, where visitors can tour the maritime museum that once served as the lighthouse keepers' house. 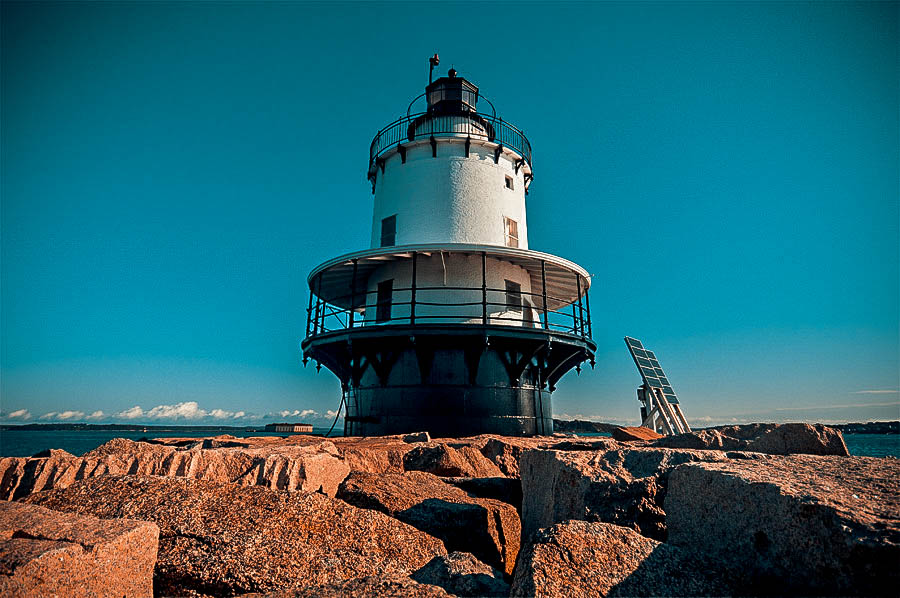 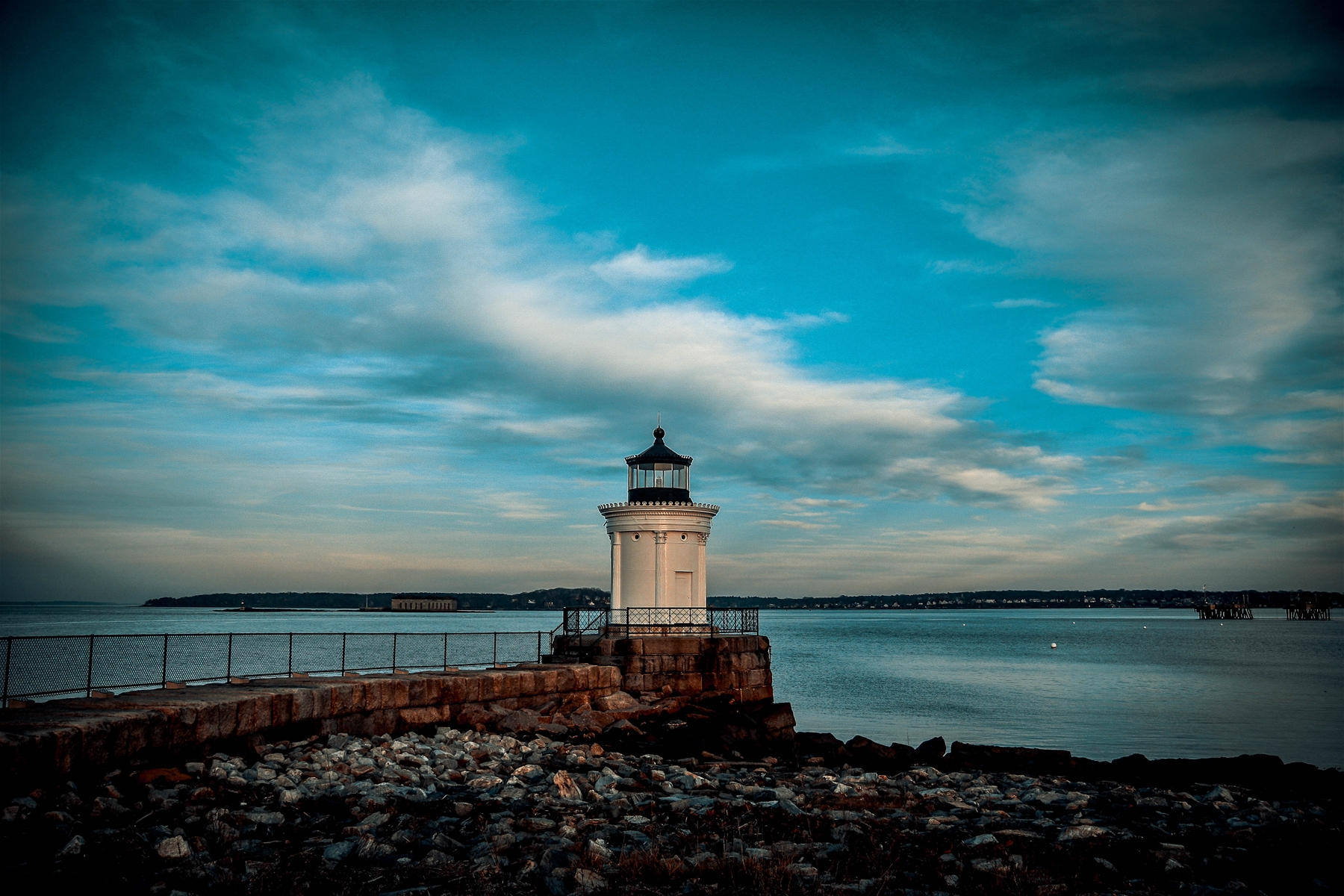 Halfway Rock Light rests halfway between Cape Elizabeth and Cape Small off Bailey Island and South Harpswell. The 77’ lighthouse was automated in 1975. Halfway Rock Light is currently privately owned, and the subject of extensive restoration.

Explore the islands of Casco Bay via the Casco Bay Lines ferry from the waterfront at Commercial Street. The oldest continually operating ferry system in the country, Casco Bay Lines has served Diamond Cove and six bay islands since the 1870s, including Peaks Island, Little Diamond Island, Great Diamond Island, Long Island, Chebeague Island, and Cliff Island (as well as narrated trips to Bailey Island during the summer season).

Ferry rides and specialty cruise options span day and night, with Sunrise on the Bay departing from the Maine State Pier at 5:05 AM, and the Moonlight Run closing out each day’s service at 9:30 PM. Locals swear by the 10:00 AM mailboat run as being the most informative of the ferry service routes. Service is offered year-round on most routes.

Pricing varies based on destination and type of cruise selected. Visitors who wish to take their vehicles will need to purchase a vehicle ticket that covers the driver, but not additional passengers. Check current schedules to plan your visit.

*Local tip - Hop on the Mailboat Run, which many consider to be the most informative and enjoyable of the ferry routes!

Casco Bay is a bustling hub of activity, luring fishing vessels, passenger ferries, and commercial tankers, as well as native and migratory wildlife. Cruise ship passengers are finding Maine’s ports to be an exceptionally welcoming waypoint, with record numbers of passengers visiting this year to partake in shopping, dining, and sightseeing.

A true fisherman’s paradise, mackerel, striped bass, bluefish, and an array of shellfish (including world-famous Maine lobster) are commonly found in the bay, as well as harbor seals migratory birds, and even whales.

Peaks Island is very small - about one mile at its widest point. Biking and walking are the preferred means to explore the island, where beaches, boats, and dockside live music set the perfect scene for genuine island time as it was meant to be. Kayak rentals, a horse camp, and local eateries offer visitors unique experiences on the island.

Diamond Cove is the center of activity on Great Diamond Island’s northern end, and home to the historic Fort McKinley site. The island offers picnic areas, hiking and biking trails, a restaurant, and a marina. Gas-powered vehicles are not allowed on the island, but golf cart rentals are a popular alternative. Great Diamond Island is the epitome of island elegance.

Long Island is a three-mile long island that is only one-mile wide, and islanders prefer to travel by bicycle. Visitors are welcome to explore the sandy beach, library and art gallery, gift shop, and restaurant-inn. 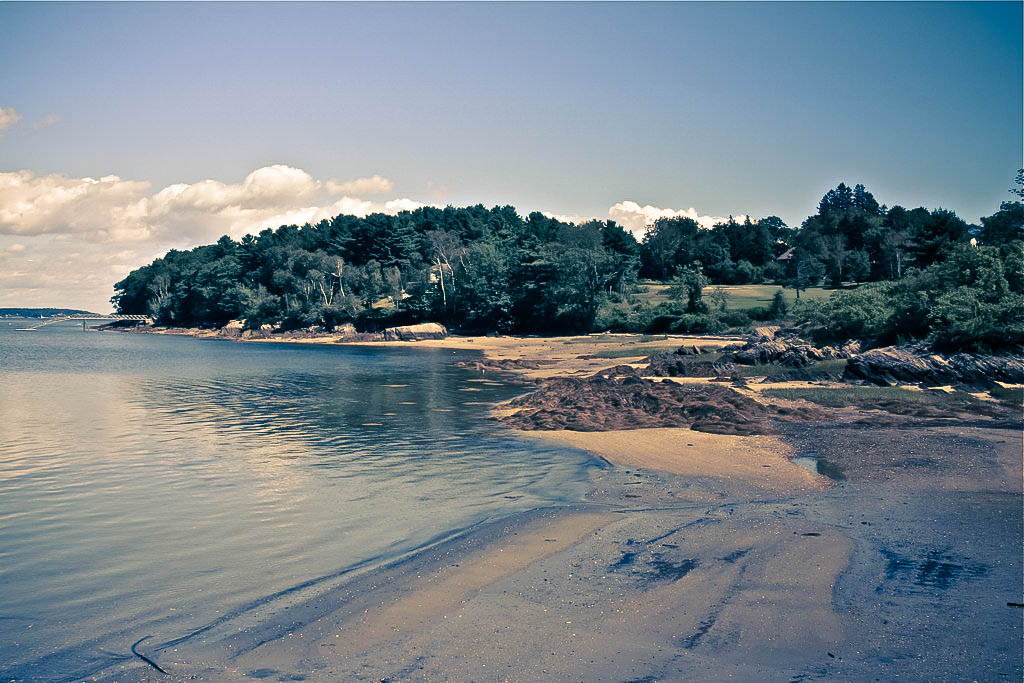 The largest of the Casco Bay islands, Chebeague Island is five miles long, and one-and-a-half miles wide. Island residents are largely seasonal, while the smaller number of year-round islanders mostly stem from generations of residents. The island’s long history in sailing can be explored at the boatyard, library, and museum. Visitors can also take a swing at the island’s golf club or enjoy a fresh catch at a local cafe or restaurant.

Cliff Island is the intriguing H-shaped island that holds claim to being the smallest of Casco Bay’s year-round island communities. The entire island is unpaved, making travel by foot, bike, or golf cart the preferred methods. The island’s library, historical society, and athletics organization help to promote a strong community environment and family-friendly events.

A post shared by Stephanie Hunter (@stephaniehunterdesign) on Sep 2, 2019 at 3:04am PDT

Bailey Island is one of three large islands in the Harpswell Neck connected by bridges to the mainland, including Great Island and Orr’s Island, and the site of some of the few remaining working harbors in the region. Shoreside seafood dinners and local art galleries provide original cultural experiences and insight into the island community. Closer to Brunswick than Portland, Bailey Island is more of an excursion from the Portland Area than the other bay islands, and worthy of a day trip to take it all in.

Some of Southern Maine’s best destinations are easily accessible from Casco Bay, making for fantastic opportunities to break up your bay day and explore the shore. Check out Portland’s Arts District and the Old Port area for a dose of local culture, eclectic global cuisine, and original boutique shops, or stroll your way along the Eastern or Western Promenade.

Across the bay from Portland, check out South Portland - home to The Maine Mall, Bug Light Park, and Willard Beach.

From end to end, Casco Bay offers diverse recreation and amusement, sure to provide an excuse to shake off your sea legs, no matter what your interest. In Scarborough, you can explore the state’s largest salt marsh on foot or by kayak. While in Freeport, you can visit the L.L. Bean flagship store and a variety of outlet shops if you need some retail therapy, or explore the trails of Wolfe’s Neck Woods for hiking in the summer and skiing in the winter.

Make a day trip of your bayside expeditions! Falmouth is home to three private golf clubs, the Presumpscot River, nature preserves, and the Portland Yacht Club. If you’re looking for a rural excursion with a cozy community vibe, check out the towns of Yarmouth and Cumberland where farm stands, waterfalls, community events, and natural recreation offer traditional family fun and discovery.

There’s no wrong way to experience the bay. The Casco Bay islands and the bayside communities along the Southern Maine Coast hold a treasure trove of natural wonder, family fun, epic sights, and memories to last a lifetime.