Explore Each Of The Maine Lighthouses

Maine is home to more than 60 lighthouses, leaving little to question its reputation as The Lighthouse State. The Portland area plays host to some of the most prominent and significant lighthouses along the Northeast Coast, including the tallest in New England (Boon Island Light), and the first lighthouse completed under the Government of the United States of America (Portland Head Light). There is a wealth of history and scenery to discover along the rocky coastline of the nation’s 23rd state, and the following lighthouses provide a great start to your expedition!

At the center of the Cranberry Islands, in Acadia National Park stands the 43-foot tall, Baker Island Light. Established in 1828, the light was the earliest to be built in the Mount Desert area and served as a guide to the southern entrance of Frenchman Bay. Built-in 1855, the current lighthouse tower stands alongside the keeper's house, oil house, and fuel house. The lighthouse grounds can be accessed by boat or seen from area charter tours.

Established in 1857, the 22-foot, Blue Hill Bay Light resides on Green Island on the west side of Blue Hill Bay, near the town of Brooklin. Also known as “Eggemoggin Light”, the light is inactive and not accessible to the public. Local boat tours and charters provide as-close-as-you-can-get viewing of the tiny island, which is only an acre at high tide.

The tallest lighthouse in Maine, Boon Island Light, stands 133 feet tall, with a focal plane at 137 feet above sea level. Located on the tiny Boon Island near Cape Neddick, Boon Island Light was established in 1811 under the orders of President James Madison during the War of 1812. Soon after, the original tower was washed away in a storm. The new tower was completed in 1855 and still functions to this day, under the operation of the U.S. Coast Guard. The light is not open to the public, but can be viewed from the water via local charters. Boon Island Light's solar beacon flashes every five seconds,

Two Lights State Park in Cape Elizabeth boasts two 67-foot rubble stone towers that many art fans will recognize from the works of Edward Hopper. The two towers, spaced 300 yards apart, were established in 1828 as a dual light system and even though only one light remains, the towers still stand proud. The land is privately owned, but the station is easily viewed from the landing located at the end of Two Light Road. 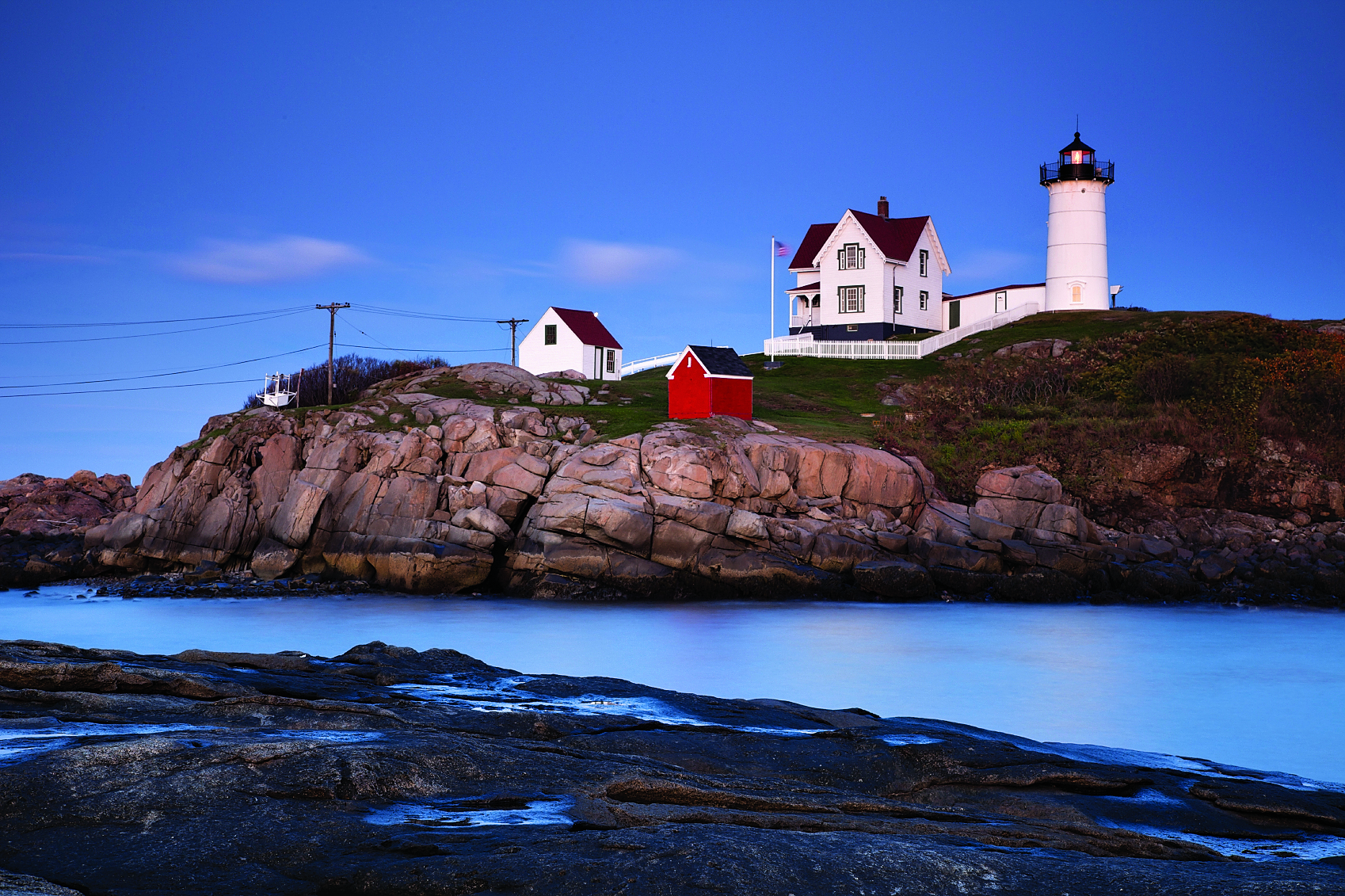 Widely recognized as one of America's most photographed lighthouses, Cape Neddick Light is still warning ships away from the rocky banks of Nubble Island with its unique red light as it has since 1879. Known to locals by the name “Nubble Light” due to its location, the actual structure only stands 41 feet tall but due to the location on such a steep rocky islet, the total height is actually 88 feet above sea level. Nubble island is not accessible to visitors but is easily viewed from York Beach, located just a few hundred feet away.

Established in 1857 near Stonington, ME, the 30-foot brick tower properly referred to as Deer Island Thorofare Light is located on Mark Island. A postcard from the early 1900s bears the name “Mark Island Light” and this name is still used by many locals. A keeper's house once stood on the property but was lost to a fire in 1959. With automation becoming active in 1958, there was no need to rebuild. As of 1998, the island is under the control of The Island Heritage Trust with the promise to keep the island as a bird sanctuary and is home to bald eagles and nesting eider ducks. While not accessible to the public, the light is viewable via numerous boat cruises offered in the area.

Originally built in 1838 near Deer Isle, ME, the Eagle Island Light had to be torn down and rebuilt in 1858 due to defects in the structure. The conical tower is 30 feet with a focal height of 106 feet. The property, located on Eagle Island in Penobscot Bay, has gone through many changes over the years with some buildings, including the keeper’s house and bell tower, being torn down. The bell accidentally fell in the bay during removal and was not recovered for several years but is now on display on Great Spruce Island. The light is currently owned by a non-profit organization that has restored the light as well as rebuilding the pyramidal bell tower. This property is easily accessible and open to the public.

Goat Island Light is located off Cape Porpoise in southern Maine not far from Kennebunkport. Established in 1835 and upgraded in 1859, the current brick tower still keeps the entrance to Cape Porpoise Harbor safe. The almost 25-foot cylindrical tower and keeper’s house are not open to the public, but are easily viewable from shore in Cape Porpoise just off State Route 9 north of Kennebunkport, and is, of course, viewable by boat.

A post shared by Maine Travel Collective (@mainetravelcollective) on Feb 5, 2019 at 5:14pm PST

Located halfway between Cape Small and Cape Casco on the Casco Bay, Halfway Rock Light has been keeping ships off its dangerous shores since 1871. Standing at an impressive height of 75 feet, the tower and attached boathouse are all that remains of several buildings destroyed by storms over the years. Not only a historic landmark since 1988 but a TV Star as well, the Halfway Rock Light restoration was the subject of a 2017 episode of Building Off The Grid. The tower is unfortunately not accessible to the public, but can be seen on some boat cruises and can be distantly seen from the Portland Observatory on Munjoy Hill.

Isle Au Haut means High Island, and with an elevation of 556 feet, it was the perfect place for the United States Army Corps of Engineers to build the 39-foot Isle Au Haut Light. The 20-acre property was purchased from Charles Robinson and Robinson's name has persisted over the years. Locals refer to the light as Robinson Point Light. It has remained active since it was established in 1907 but the property has changed hands many times. Currently owned by the town of Isle Au Haut and restored in 1999, the complex is open to the public with Isle Au Haut Island accessible via a ferry from Stonington, ME. Isle Au Haut is occupied by about 50 year-round residents. The island was the last in the nation to stop using crank telephones and many of the homes still have neither telephone or electricity.

Originally established in 1855 as a wooden structure, the current Portland Breakwater Light, also known as Bug Light due to its small size, was rebuilt in 1875. The new 25-foot lighthouse was constructed of cast-iron plates hidden by ornate architectural features. Designed by Thomas U. Walter, famous for designing the US Capitol east and west wings as well as its current dome, the lighthouse features six Corinthian columns inspired by the Choragic Monument of Lysicrates in Athens. Originally decommissioned in 1943 as the breakwater was absorbed by the landfill for shipyards building Liberty Ships for the war effort, the lighthouse was restored in 1989 and reactivated 2002. Bug Light Park has been established in order to allow visitors to view the Portland Breakwater Light up cose. 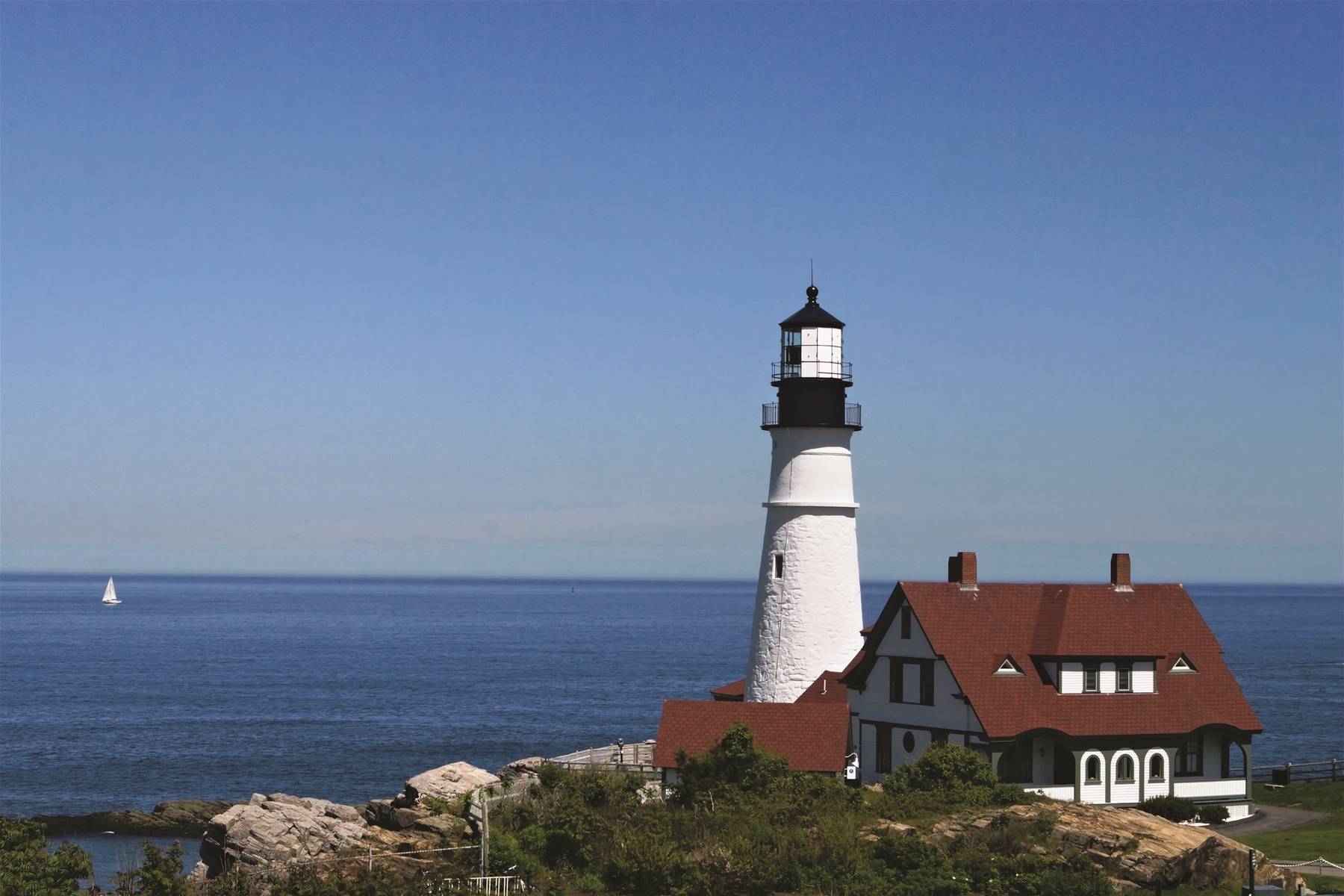 Possibly the most famous in New England, the Portland Head Light was the first lighthouse completed by the federal government. Established in 1791, the 80-foot tower was originally powered by whale oil. President Washington personally chose Jonathan Bryant and John Nichols to take charge of construction in 1787 with instructions to use local materials as a cost-cutting measure in the construction of the buildings and lighthouse itself. Other than some modernization and the building of a whistle house in 1975, the station has changed very little in over 200 years. Easily accessible to visitors, the entire complex is located within Fort Williams Park. The grounds are replete with walking paths including a cliff walk, picnic tables, and an arboretum.

Established in 1883 and located about 100 feet off shore on Fisherman’s Passage in Boothbay Harbor, Ram Island Light is known for shipwrecks and ghost stories. Rebuilt multiple times over the years due to storm damage, the 36-foot tower still stands proudly helping vessels navigate the waters of the Fisherman’s Passage. This complex is not open to the public, but can be viewed from the water.

Seguin Island is located at the mouth of the Kennebec River. Originally commissioned by George Washington and built in 1795, the existing 53-foot lighthouse was constructed in 1857. With the distinction as the second oldest and tallest lighthouse in Maine, it’s no surprise that the light can be seen for more than 20 nautical miles. The station houses the only First Order Fresnel lens still used in Maine. Seguin Light is registered on the National Register of Historic Places and is open to the public. The former keeper’s house now houses a museum and gift shop. Seguin Light is considered to be one of the most haunted lighthouses in Maine. The island is accessible by private boaters, and tours are available in the summer. 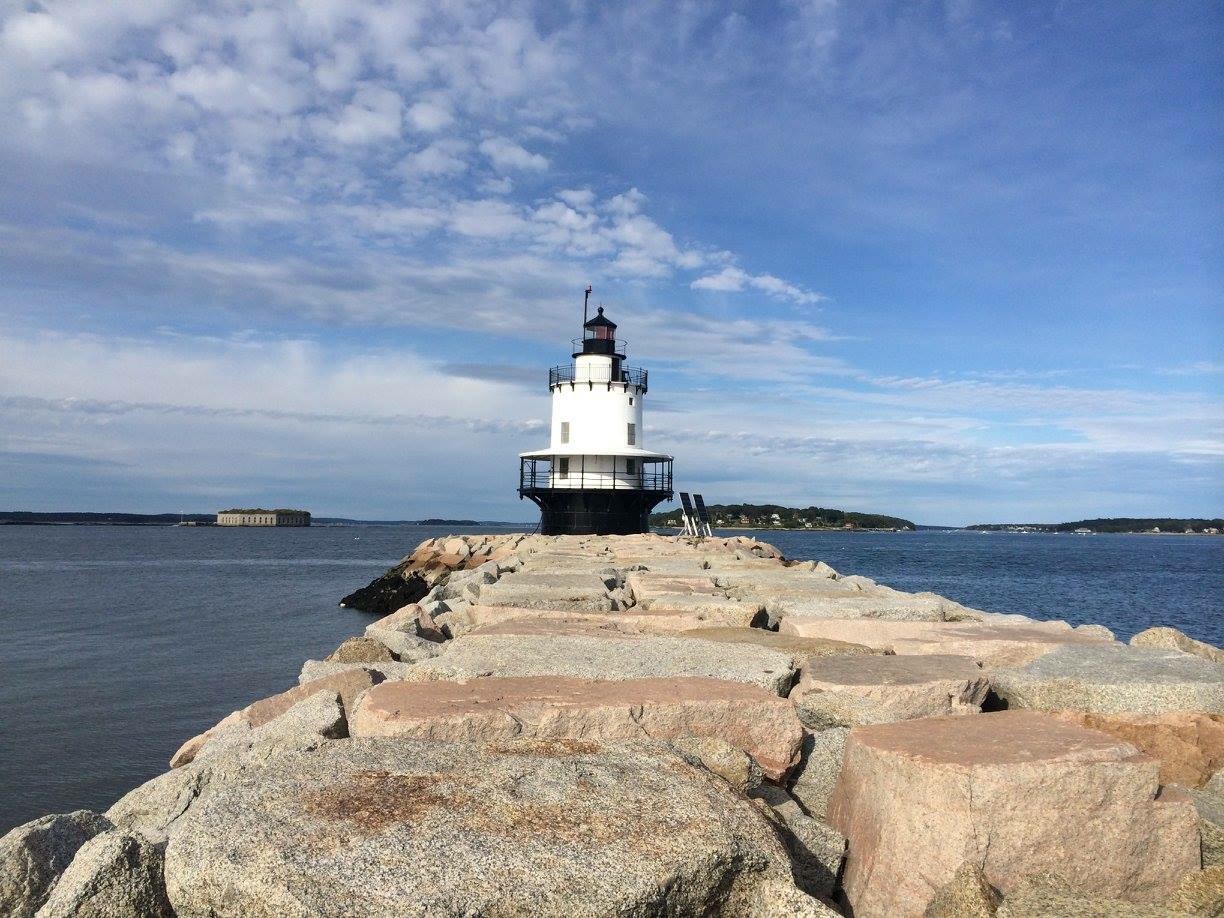 Not far from the Maine - New Hampshire border, located on a rocky outcrop off the coast at the mouth of the Piscataqua River and originally built in 1820, Whaleback Light, a stone lighthouse, stands 53 feet above sea level. The structure has been rebuilt many times over the years due to the open location. The current structure was built in 1872 and is still in service today. The lighthouse is visible from the Kittery shores and is also accessible via boat. During high tide the ledge becomes completely submerged.

Surrounded by 30 acres of wildlife preserve the Wood Island Light has stood vigil over the Saco River since 1808, and was built under orders from President Thomas Jefferson. The structure was rebuilt in 1858 and boasts a 49-foot tower with a focal height of over 70 feet. The lighthouse is open to the public and is best viewed via boat tour.