You don't have to be an ornithologist to appreciate birdwatching in southern coastal Maine! In our everyday lives, we're all bird watchers to some extent. If you've ever taken notice of a hummingbird outside your window or admired a basking duck beside a lake, you are qualified to enjoy the unique opportunities afforded by one of the top birding destinations in the United States, so why not turn this casual occurrence into a rewarding new hobby?

With a few tips on where to go and what to look for, you can be birding like a pro in no time, and discovering a whole new way to appreciate the great outdoors on your next Maine getaway. The state’s best birding destinations include some of the most notable views, natural attractions, and historical points of interest, allowing visitors to enjoy the best of Maine while on the path to unrivaled bird sightings.

Not everyone is up for adding extreme activities like whitewater rafting or snowboarding to their Maine vacation plan. Birding is a great option for those looking to stay active in a milder way while appreciating the remarkable nature of New England. Unlike kayaking and skiing, there isn't a lot of equipment to worry about. You're set for a birding excursion with just a few simple items in a backpack. Grab your binoculars, camera, snacks, water, sunblock, and maps that outline your route, and you are ready to go! You can tour on foot or by bicycle depending on your activity level and interest. Maine's coastal communities are home to knowledgeable guides offering chartered boat tours, and some are geared specifically toward birding, so consider a tour on the water as well, and let the local pros lead the way!

Make sure to keep a bird species guide handy to aid in the identification of the birds you discover along the way! From the commonplace to rare sought-after species, you're sure to encounter a range of marvelous findings along Maine's southern coast. The unique climate and ecology of the area promote year-round biodiversity, from sandy beaches and salt marshes to rocky shorelines and pine forests, serving as breeding grounds and habitats to more than 330 species of birds. Be sure to educate yourself on migratory patterns if seasonal birds are of particular interest, and plan your travel dates accordingly!

When To Go Birding In Maine

Birding in southern Maine is possible at any time of the year, but there are certain factors to consider in regards to the timing of your birdwatching adventure. Seasonal shifts usher in changes to representative species and their activities, which are dictated by natural migratory patterns.

The spring migration finds some species beginning to arrive in early March, with waves continuing into June. Earlier arrivals include mixed flocks of sparrows, hawks, and the American Woodcock, but the warbler migration that dominates May is easily the most popular draw of the season. Shorebird migration peaks in mid-late May, leading into the summer's prime breeding season, especially for sought-after island fowl like Atlantic Puffins, Razorbills, Piping Plovers, and terns.

Fall bird watching opportunities are legendary along the Maine coast, where visitors can find thousands of shorebirds representing more than a dozen species. Meanwhile, flocks of migrating songbirds inhabit the neighboring forests and offshore islands throughout the region's extended fall migration into November, as seabird and waterfowl species such as Great Cormorants, grebes, loons, gulls, and the endangered Roseate Tern find habitats along the shoreline. For the most diverse array of species, aim to visit from mid-May to early June, or from mid-July through September.

With Portland essentially marking a transition point of climates for an assortment of bird populations, it serves as the northernmost range for many southerly species, and a southern boundary for those more suited to cold climates. The unique ecology and climate of the region and its location in a primary migratory route make it a thriving spot for an extensive range of species.

Located about a half-hour south of Portland, just past Kennebunkport, the Wells National Estuarine Research Reserve provides sanctuary to more than 240 shorebirds, waders, and seabirds in salt marsh, forest, and oceanfront habitats that can be viewed along seven miles of trails. The reserve's Maine Coastal Ecology Center offers a collection of exhibits on estuarine environments and inhabitants. Birds that may be found here include seasonal migrants like the Wild Turkey, egrets, Osprey, Bald Eagles, Piping Plover, Willet, terns, Alder Flycatcher, Veery, warblers, Nelson’s Sparrow, and Bobolink as well as year-round residents like the Common Eider, scoters, and Red-necked Grebe (albeit more sporadically). Migrations peak in late summer.

Less than a half-hour's drive from Portland, the coastal town of Biddeford is situated just 5 miles from Old Orchard Beach, luring shorebirds and seabirds to its thriving Atlantic Coast shores. Biddeford Pool is a large tidal pool, located off the south end of Saco Bay, and a popular birding site. The small harbor area is surrounded by tall grass salt marshes that are home to a variety of birds and wildlife. Situated at the end of Biddeford Pool, Maine Audubon’s East Point Sanctuary provides respite to wintering waterfowl and summer shorebirds, including Black-capped Chickadees, Peregrine Falcons, Ruby-throated Hummingbirds, Red-Throated Loon, Red-Necked Grebe, Northern Gannet, Great Cormorant, Purple Sandpiper, Razorbill, and Black Guillemot. Look toward neighboring rocky islands for Snowy Owls in the winter.

Just about 10 miles from Portland, Scarborough is home to the state's largest salt marsh estuary, and an exceptional year-round birding hot spot - Scarborough Marsh. This 3,100-acre preserve features barrier beaches as well as salt and freshwater marshes that provide a safe haven for wading birds, waterfowl, shorebirds, and raptors of many types. On approach, the Audubon Center provides area guides, a nature trail, guided tours, and canoe and kayak rentals. During the warmer months, resident species include diverse herons, egrets, terns, sparrows, and Osprey, along with the Bald Eagle, Virginia Rail, Glossy Ibis, Belted Kingfisher, Marsh Wren, Common Yellowthroat, and Bobolink. Cooler months bring in the ducks, loons, and grebes. Shorebird migration at Scarborough Marsh reaches its peak in August.

happy place aka the woods #nofilter

Located just outside of downtown Portland, Falmouth's Gilsland Farm Audubon Center features 65 pristine acres of woodland, grassland fields, and salt marsh estuary. It is also the headquarters for Maine Audubon, and home to numerous bird-centric events and festivals throughout the year. 2.5 miles of trailways provide views of more than 250 species of birds residing or migrating alongside the Presumpscot River, including Wood Duck, Wild Turkey, egrets, Glossy Ibis, Osprey, Bald Eagle, flycatchers, Marsh Wren, Cedar Waxwing, warblers, Swamp Sparrow, Bobolink, and Baltimore Oriole. Visitors are also invited to explore the apple orchard, a peony garden bustling with butterflies and dragonflies, and a small pond that is home to frogs and muskrats. Located about 11 miles off the coast of Maine, Monhegan Island is a small island, approximately 1.7 miles long and 0.7 miles wide, with no cars or paved roads, making it one of the most worthwhile and tranquil birding destinations along the New England coast. The island is the perfect stopping point for migrating birds making their way up the coastline to stop and feed, so sightings are heavily dictated by the seasons, but epic at their peaks! The peak migration periods are May and from late August through early October. Monhegan Island plays host to just about every migrant species traversing the eastern United States, as well as numerous resident species and common seabirds. The most regular sightings in the area include Common Eider, Common Loon, Black Guillemot, Long-tailed Duck, Red-throated Loon, Red-necked Grebe, Northern Gannet, Great Cormorant, and Iceland Gull.

Less than 30 minutes from Portland in Kennebunk, Kennebunk Plains Preserve is a 2,000-acre habitat and natural area with an array of plant and animal life to discover. Kennebunk Plains and its blueberry barrens serve as habitat and breeding grounds for more than 170 bird species, like the Upland Sandpiper, various sparrows, Ruffed Grouse, Wild Turkey, Broad-winged Hawk, Eastern Whip-poor-will, flycatchers, Horned Lark, warblers, Bobolink, and Eastern Meadowlark. Late in the summer, the plains are dominated by the vibrant purple hues of the Northern Blazing Star, a spectacular flower whose presence in the state of Maine is isolated to the preserve.

Marginal Way is a popular paved, mile-long footpath that straddles the rocky shoreline from Perkins Cove in Ogunquit. Home to wintering seabirds and waterfowl like the Harlequin Duck, Purple Sandpipers, Red-throated Loons, grebes, scoters, Black Guillemots, and King Eider, the coastal path is also appealing to visiting landbirds like White-winged Crossbill, Common Redpoll, Cedar Waxwing, sparrows, mockingbirds, cardinals, and passerines. This is a favorite, scenic spot for birders from November through March.

Worthy Of A Day Trip - Birding And Extended Adventures

Extending your birding journeys just a bit opens up a vast array of possibilities for outdoor activity and scenic discovery! Within an hour's drive of Portland, visitors can explore a pair of Maine State Parks that offer exceptional wildlife opportunities, and much more! Other notable locations in the Maine parks system include Acadia National Park on Mount Desert Island, Aroostook National Park in Presque Isle, and Baxter State Park in Millinocket. Each is about a 3-4 hour drive from the Greater Portland area. Situated on the borders of the Kennebec and Morse Rivers, Popham Beach State Park is a prime location for birdwatching, as well as kayaking, wildlife viewing, and fishing. The park encompasses over 500 acres of spruce forests, river estuaries, tidal salt marshes, and sandy barrier shores that provide a migratory layover for northern warblers and wintering loons, and diversified sanctuary for shorebirds like the Piping Plover and Least Tern inhabiting the dunes. Sea ducks are plentiful and easily spotted here. 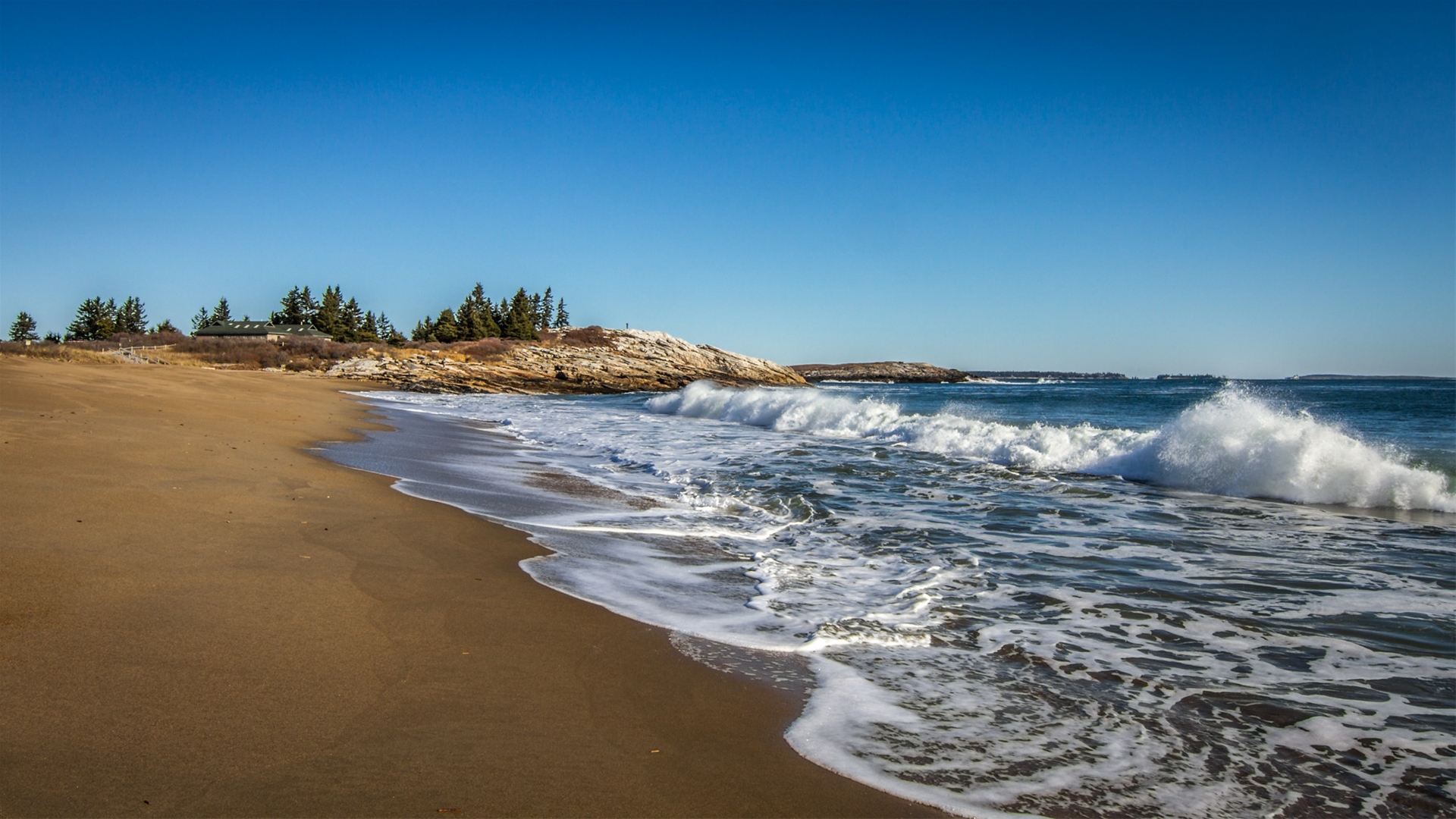 Reid State Park in Georgetown is Maine's first State-owned saltwater beach. Lined with abnormally large sand dunes, the expansive beaches at the 770-acre park provide nesting areas for endangered least terns and piping plovers, and habitats for migratory seabirds. Sandwiched between the tidal marsh of the Little River and the mouth of Sheepscot Bay, the park features spruce forests, salt marshes, barrier beaches, and access to the bay, creating a peaceful haven for northern warblers, herons egrets, sparrows, and Great Cormorants, especially in the winter months.

To make the most of your Maine birding adventure, check out the full Maine Birding Trail network. The system comprises 82 official sites divided among 14 separate loops. The network provides access to a range of natural habitats and breeding areas. The birding trail covers the entirety of the state, from the northern boreal forests and their famed boreal chickadee and spruce grouse populations to the coastal marshes and offshore islands that define the Casco Bay region and its resident and migratory seabirds like the celebrated Atlantic puffin.

A free guide booklet is provided by the Maine Office of Tourism at official Visitor Centers in Maine, or available immediately by download. The Maine Birding Trail also hosts several birding festivals, workshops, tours, and group events throughout the year.